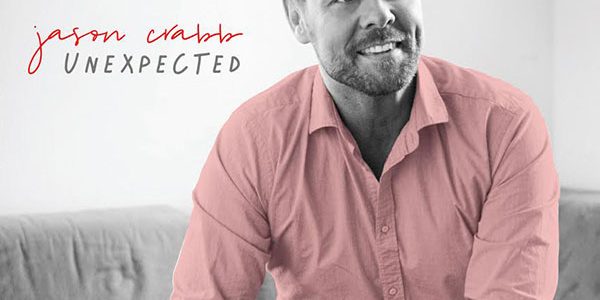 But when he was making his most recent album, he blended other voices in with his own to create a new, fresh-and-yet familiar sound that will resonate with old and new fans.

From writing with disco queen Gloria Gaynor to enlisting pop singer Kaya Jones for a duet, Unexpected (out today) reflects all facets of Crabb’s art.

He also partnered with Rascal Flatts member and it-producer Jay DeMarcus to produce his newest outing.

“I am so excited about this record,” says Crabb. “It’s always exciting to work with Jay DeMarcus, he just knows how to pull the best out of me.”

The love is mutual.

“Jason is one of the most gifted singers, hands down, anywhere in any genre. Truly a joy to work with,” says DeMarcus. “Anyone can sing about being a Christian. It is another thing entirely to live it and lead by example. Is Jason a world-class vocalist? Yes. He has an amazing ability to move any crowd, but the man behind that voice is even more amazing, and I’m most proud of the fact that I’ve been around him enough over the years, to see his convictions lived out before my eyes, and that’s the true definition of greatness.”

DeMarcus was so inspired by Crabb that he reached out to his own bandmate, Rascal Flatts frontman Gary LeVox, with an idea.

“I played ‘Chose To Be My Friend’ for Gary and asked him if he’d be interested [in singing on it] and he immediately said yes. I know that both guys really have a lot of mutual admiration and respect for each other. Selfishly, I’m just thrilled to have two of my favorite singers on a song I had a hand in producing!”

For LeVox, the experience was a moving one.

“What an honor it was for me to sing with one of the greatest voices to ever hold a microphone,” he said. “I am so grateful for the opportunity. What an amazing song to be a part of.”

For Crabb, it was a full circle moment that made releasing the album–and the song–that much sweeter.

“There’s just no one that can sing like Gary LeVox,” he says. “The way he delivers that lyric, it just makes the song come to life. We’ve been friends for a while now and have always wanted to do something together, and this was the perfect song and the perfect lyric. I’m super ecstatic to have him on this record.”

Watch the “Chose To Be My Friend” lyric video below, and check out the full album here.