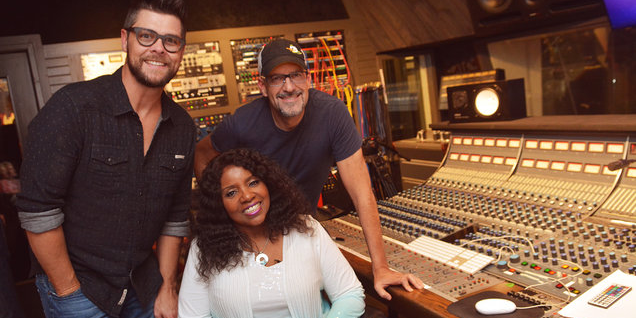 Watching the evening news makes many people want to just tune out and find a way to escape the harsh realities staring them in the face. For Jason Crabb, seeing the state of the world on his family’s TV set spurred emotions that found their way onto his new album, Unexpected, which arrived Friday (April 20).

“We were in the middle of preparing for this record,” Crabb tells Billboard. “We were turning on the TV and seeing a lot of chaos going on, and it really hit me in the heart. I felt like we were backpedaling instead of moving forward as a country, as a people. We’ve been singing we need to come together, and we’re just pushing each other further away. I was meditating on those moments, and the whole record is really leaning towards that.”

Despite his youthful visage and boyish charm, Crabb is a Christian music veteran who started singing with his family band, The Crabb Family, in his teens. The award-winning group became one of Southern gospel music’s most successful acts before disbanding to pursue solo efforts in 2007. His self-titled solo debut won a 2010 Grammy for best Southern, country or bluegrass gospel Album, and over the years, Crabb has collected 21 Dove Awards, including male vocalist and artist of the year. Unexpected is Crabb’s fifth solo album (including the holiday collection Because It’s Christmas) and follows his 2015 set Whatever the Road, which found him expanding his sound beyond the Southern gospel/roots country markets he’d already plowed successfully.

With a strong, soulful voice, the Kentucky native has been embraced by a variety of music communities. He sings with disco queen Gloria Gaynor on her new gospel album Testimony, has performed with the Brooklyn Tabernacle Choir, and recently joined Trace Adkins, Bart Millard and Blake Shelton at Nashville’s Ryman Auditorium for “Jammin’ to Beat the Blues,” a benefit concert for Mental Health America of Middle Tennessee.

Working with producer Jay DeMarcus (bassist for platinum-selling country trio Rascal Flatts), Unexpected delivers something for all of Crabb’s diverse fanbase. “This record really crosses all genres,” Crabb says. “‘Short Are the Years’ is as country as can be, and then ‘Mercy, Can’t Go Beyond’ is adult contemporary with horns arranged like you’d hear on a Chicago song, and then the song we did with Gary LeVox, ‘Chose to Be My Friend,’ is a song my dad wrote back some time ago, but if you love Chicago and Journey, then you’ll like this song. It’s got that feel of the ’80s ballad, and so we kind of addressed that too. There’s a little taste of something for everybody on this. I just thank God that he allows us to address all of those things.”

Crabb credits DeMarcus for helping shape the sound of the record. “I really enjoy working with Jay so much. He brings more out of me, plus he lets me be myself. He lets me be who I feel I ought to be,” says Crabb, who is being inducted into the Kentucky Music Hall of Fame on May 11. “If anybody knows the timber of what I do, I’d say it is my family, and they said, ‘He gets out of you the closest of what you give live than anybody. This record is more of what you sound like live.’”

Another Rascal Flatts member contributes to Unexpected: As mentioned, lead vocalist Gary LeVox joins Crabb on “You Chose to be My Friend.” “This guy didn’t have to do this. I’m just so thankful for him,” Crabb says of LeVox, adding that the Flatts vocalist gave him the best compliment. “He said, ‘Your voice has truly been hand-placed by God. What a gift you’ve got, bud. Thanks again for letting me sing with you. I’m honored. I absolutely love this song!’ I felt so empowered. How sweet! What a great compliment and what a boost of confidence [it gave me].”

Canadian-American pop singer and former Pussycat Dolls member Kaya Jones sings on “Let It Be Love” and Crabb co-wrote the emotional ballad “Day One” with Gaynor and Chris Stevens. Gaynor and Crabb originally connected via social media, and he invited her to come onstage and sing “Precious Lord, Take My Hand” with him during his Carnegie Hall show in 2016. They became friends and collaborated on “Day One.” In the song, Crabb sings to God: “All my hopes should be found in you/ Not the socials or the daily news/ ’Cause they don’t have the truth/ Only you can set me free.”

Collaborating with noted songwriters such as DeMarcus, Kenna West, Michael Farren, Jimmy Yeary, Dave Barnes, Ronnie Bowman and Tony Wood, Crabb crafted a collection of tunes that shares his feelings on the chaos in the world today. “We are called to love one another,” he says. “We aren’t called to fix one another. We aren’t called to do all those things. We are just called to love one another, help one another,  lend a hand and shut the door to hate and all those kinds of things. Those are some of the things I just wanted to scream. I just really feel called to tell everybody, ‘Come on, let’s lay the hammer down and let’s love each other.’”

Crabb says when he was watching news coverage in the aftermath of the hurricanes, he saw people from all walks of life helping each other. “I dare to say that probably not everybody helping one another voted the same way, but in dire times, they were helping each other,” he notes.  “Well, it shouldn’t come to dire need that we love each other. I think it should be us loving each other all the time.”

He shares that sentiment in “Let There Be Love,” which was co-written with West and Farren. The second verse says “We’ve all got a million stories we could tell/ But way too many times we keep them to ourselves/ But everything’s changing/ Can you feel it? There’s a stirring. There’s a shift/ We figured out that we were made for times like this/ And everything is changing. Everything’s changing.”

Ironically, one of the most personal songs on the album is one Crabb didn’t write. Penned by Michael Boggs, Neil Thrasher and Bryan White, “Short Are the Years” addresses the challenges of modern parenting — trying to take kids to their ballet classes, ball games and other activities and acknowledging that “long are the days,” but reminds parents that short are the years, as the lyric says: “They go by in the blink of an eye and your babies grow up and in no time you turn around to pick them up but they’re not here. Short are the years.”

“Right now, I have a 12-year-old and a 15-year-old, both girls, and seems like yesterday I was bringing them home from the hospital,” he says. “Now they are 12 and 15 years old, and you look back and go, ‘Golly, how time flies!’ Now I’ve got one who has a [driver’s] permit and they have little boyfriends and all that kind of stuff, and I’m like, ‘This is just too much.’”

Crabb says he was trying to write a song about life with his wife Shellye and his two daughters when someone suggested he listen to “Short Are the Years.” “I flipped,” he says excitedly. “I was like, ‘There’s no way I’m going to get to cut this song,’ but they said, ‘No, we’re glad that you’re going to record it,’ and boy was I ever glad that they let me have it!”

The first single, “Washed by the Water,” was penned by Crabb, Dave Barnes and Jordan Reynolds and is currently being shepherded up the charts by Daywind Records. Early in his career, Crabb and his family licensed their indie albums to Daywind, so Crabb signing with Daywind to release Unexpected feels like a homecoming. “It’s for sure familiar ground, and ground I’m so excited to be on because [founder] Dottie [Leonard Miller] and the whole Daywind team, I’ve known them for years,” he says. “We talked about doing this together again, and it’s a really, really good feeling.”

Crabb will be touring heavily the remainder of the year to promote Unexpected and is also working on his children’s book series. “It’s a 10-book series we’ve been doing for the last few years, and so we’re hoping to get that completely finished this year,” he says. “We’ll have probably three books that will come out and finish up the year. More than anything, we’re looking forward to a heavy touring schedule, which will allow us to get out and love on people and to play them this music that I feel so honored to get to sing.”

A big night on his upcoming calendar is his May 11 induction into the Kentucky Music Hall of Fame alongside this year’s other honorees: Billy Ray Cyrus, Dale Ann Bradley, Grand Ole Opry star David “Stringbean” Akeman, Bobby Lewis and Jackie DeShannon. “I can’t believe it. I’m very thankful that my home state would recognize and honor me,” says the Beaver Dam, Kentucky, native, who currently lives outside Nashville. “It’s a blessing. I’m really overwhelmed and really almost don’t know what to say. I’m thankful that my home state would love me like they do.”